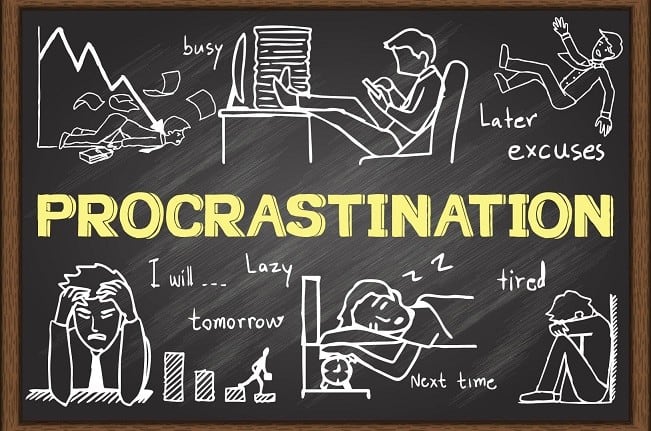 Why do we procrastinate?

Fear…we’re afraid that if we do the thing we might just fail. But hey, we might just succeed too. If we don’t try we are guaranteed to fail, right?

Fear…we’re afraid that if we do the thing we might just succeed – and then what will be expected of us? We’d have to keep on succeeding (yikes). However, it could lead to wonderful new heights, experiences, fun too, couldn’t it?

Fear…we’re afraid we won’t enjoy doing the thing, whatever it might be. And maybe we won’t – but it’s a whole lot better than the pain of putting it off. At least we will get something at the end of our pain. With putting stuff off we end up with nothing, except more pain.

Fear…we’re afraid of doing the wrong thing. Maybe it will be the wrong thing, but we won’t know for sure until we do it and if it is wrong we’ll have valuable information on what is the right thing to do next. It’s all learning after all, isn’t it?

Here are some suggestions on how to tackle this annoying way of life:

If you get it wrong, at the very least you get feedback and experience and you can alter your course in the direction of the right decision. Sitting there dithering, stewing gets you nowhere. It’s a waste of life. And, boy, is it stressful.

Generally what happens is that five minutes of solid effort is enough to get you over that hump of procrastination and once the ball starts rolling you’re usually happy enough to continue to let it roll. More often than not you’ll find that the imagined pain of doing the task is far, far worse than the real pain of actually doing it. Think of it like taking a plunge into a cold swimming pool. For the first minute or so it’s a bit uncomfortable but then as you acclimatise it becomes kind of nice…doesn’t it?

It’s so easy these days, with emails popping in, texts pinging you, phones ringing, Facebook beckoning you and colleagues sticking their heads around the door, to let yourself be interrupted. You stop your task and then God only knows when, if ever, you come back to it. No, no – complete the action. Hang on in there and get it done. Do not let anyone or anything stop you.

I used to find that I’d be re-reading emails over and over because I hadn’t taken final action on them when they first came in. So I’d waste time re-reading them, then I’d waste paper and ink printing out attachments that I had previously printed out because I wasn’t sure I had already printed them – and I developed the frustration and confusion that comes from an over flowing Inbox and paper tray. The rule is ‘touch it once’ and get rid of it, if possible. You’ll save time, paper, ink, head space and stress.

The chances are that doing it might lead to some minor temporary discomfort but not doing it will lead to longer lasting pain, stress and possibly missed opportunities. How many times have you fretted and stewed for days (if not weeks) over an assignment that when you finally got around to tackling only took a few hours? Imagine weeks of pain for the sake of a few hours of discomfort! Mad, eh? You need to realise you are accepting long term pain for a very short term (and very often not even that enjoyable, guilt laden) gain.

In all of eternity NOW is the only time that you can really, actually physically do anything. Now is really the only time you have, so rather than wasting the precious now by putting off what you know you should be doing,  use it to make your  life wonderfully positive and productive – and in all likelihood wonderfully enjoyable and satisfying.

If something is important enough to you that it is hanging over you and ruining your day then it is important enough to get done (otherwise why not just forget about it?) Choose to live a life of priority. Now, that doesn’t mean no fun and all work, but it does mean taking the time to realise what is important to you and committing to getting that done, for your own sake, growth and peace of mind. So do not put off what you need/want to do. Get it done now so you can make the most of your life and not whittle it away in fear, procrastination and just plain selling yourself short.

So…when are you going to do this? When will you take that first step to a better more fulfilling life?